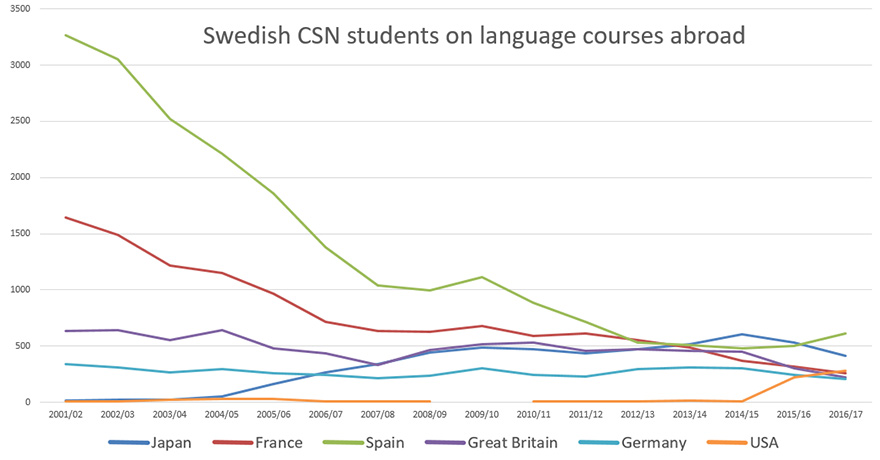 Spain and Japan most popular for Swedish language students

Swedish students love to study abroad. Now we have received the statistics from CSN for 2016/2017 and take a look at which countries are most popular for language travel.

Language travel on the decline

The decline has been biggest in Europe where the number of Swedish language travel students has decreased by 80% over the past 15 years. This year's biggest losers were the UK and France both reaching their lowest number this century with 223 and 257 Swedish language students supported by CSN.

Spain is back on top as the most popular country

For many years Spain was the most popular destination for Swedish language travelers. A relaxing lifestyle and sunny weather kept the Swedes coming. However, like the rest of the European market, Spain has faced a big decline over the last 15 years and now has less than 20% of the students it had 15 years ago. However, the last academic year numbers have gone up, and with 611 students Spain was the most popular country for Swedish language travel students during 2016/2017. This was the highest number of Swedish language students to Spain since the academic year 2011/2012 when 714 students studied there.

As usual, Barcelona was the most popular city for Spanish language courses.

Japan has most student weeks

Japan has gone against the trend in Sweden and grown a lot in popularity over the last ten years. So much so that Japan has been the most popular destination for Swedish language students over the past three academic years. However, this year the number of students fell from 531 to 416, which meant that they did not have a chance against Spain. But looking at the number of student weeks Japan is still in the lead with 9194 weeks, compared to Spain's 6843.

Read more about language travel and language schools in Japan.

The US on the rise

Until mid-2015 Swedish students could not get CSN-funding for studying European languages outside of Europe. Once this rule changed, the US started to grow rapidly as a language travel destination for Swedish students mainly at the expense of England which has decreased almost as much. With 287 students, the United States is the third most popular country for Swedish language travel students the past academic year.

Read more about language schools in the United States.