Here you can read more about the IELTS-exam and find language schools that give IELTS prep courses. IELTS is an abbreviation for International English Language Testing System. The test is an entry requirement to many universities in the English speaking world such as England, Australia and New Zealand.

Please note that we are currently in the process of tagging the schools in our school database by subject so there are many more universities around the world who offer this subject. 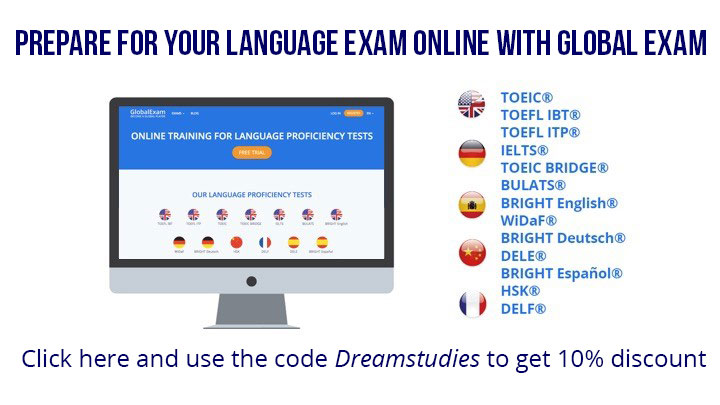 Questions and answers about IELTS-exam

Why should I take an IELTS-exam?

British and Australian universities often require you to show an approved IELTS result as a part of the admission procedure. The IELTS-exam is also valid for studies in English in many other countries around the world.

What score do I need?

The required score vary between different universities. The admission requirements are usually 6-6.5. Sometimes combined with minimum requirements for each section, a school can, for example, require IELTS 6.5 with at least 6 in each section.

Where can I take the IELTS exam?

There are the IELTS-exam centers all over the world. In England, the test is given almost every week. You can search for a test center and test date here. It is the IELTS Academic you need to apply for a university.

What is the cost of the IELTS exam?

According to our latest information, the exam costs £160 in the UK. The price varies between different countries.

How do I prepare for IELTS?

Look at a sample test so you know what to expect. If you need to improve your English before taking the exam, I recommend taking an IELTS-preparatory course in an English speaking country and then take the test right after the end of the course. On this page, you will find English language schools that provide IELTS-exam courses.

How long is an IELTS exam valid?

Where can I read more about IELTS?

You will find a lot more information on IELTS' official website.

What is the difference between TOEFL, IELTS and the Cambridge Exam?

Many universities accept TOEFL, IELTS and Cambridge English Qualifications with individual score requirements for each exam. TOEFL and IELTS are the most commonly accepted for University applications, but the test results are only valid for two years, so don’t take the exams before you know that you need them. If you want a qualification to show employers and others that you are good at English, then the Cambridge Exams are a good option. They are widely accepted around the world. They do not have an no official expiration date, however it is worth noting that some universities or employers will only accept a Cambridge Exam taken within 2-3 years because language skills are known to diminish over time. If you are looking for a job in the English-speaking world, you could also consider the TOEIC-Exam.

The exams test all four language skills (reading, writing, speaking and listening). Here are some other differences between the different tests:

If you are unsure about which degree to take, consider where you want to study and look at the school's admission requirements.